It seems like we just can’t stay away from the road!  Neek, Sar and I once again piled into the car and took off.  Once again, one of my sisters (the youngest) was getting married and we were invited.  But it wasn’t in Oregon; this was a destination wedding in Palm Springs, California.  We decided to make the most of this occasion and planned a desert road trip!

The first place we wanted to visit, even before checking into our hotel, was the Palm Springs Visitor Center.  It was originally an Enco service station called the Tramway Gas Station, named so because of its location at the foot of Tramway Road, which leads to the base of the Palm Springs Aerial Tramway.  END_OF_DOCUMENT_TOKEN_TO_BE_REPLACED

Old Sacramento is located within the Old Sacramento Historic District which is a U.S. National Historic Landmark District.  The city of Sacramento was developed in the mid-nineteenth century as an extension of Sutter’s Fort as the Sacramento River was the main waterway to the west coast.  John Sutter was the owner of the fort and Sutter’s Mill where gold was found setting off the California Gold Rush.

The waterfront was subject to flooding on a regular basis before the levees were built.  This caused much damage to the buildings in the area and brought in disease such as cholera.   END_OF_DOCUMENT_TOKEN_TO_BE_REPLACED

We continued our journey along Highway 49, but decided to take a slight detour.  After taking a right on to Pleasant Valley Road and driving several miles, Neek, Sar and I arrived at the South Yuba River where South Yuba River State Park is located.  Nearby, we found the object of our search: Bridgeport Covered Bridge.

This 19th century bridge attracted our curiosity because it is reported to be the longest single span wooden covered bridge in the world!  END_OF_DOCUMENT_TOKEN_TO_BE_REPLACED

Fires are one of the biggest threats to the old mining towns of the West.  Most of the buildings were made of clapboard and very easily caught fire from wood burning stoves or an errant cigar left unattended. One such cigar may have cost a man a whole building.

During our Highway 50 Loneliest Road in America Challenge, we found out that the Eureka Opera House in Eureka, Nevada was a recently renovated cousin to the Piper’s Opera House in Virginia City, Nevada.  We decided to visit.  The road up to Virginia City was a bit windy and hilly.  I gave Lex directions and It didn’t take long for him to find the impressive structure.   END_OF_DOCUMENT_TOKEN_TO_BE_REPLACED

Right down the hill from Universal Studios, Hollywood is a preserved historic site that is probably one of the most important sites for California and the United States. Campo de Cahuenga was an adobe ranch house where the Treaty of Cahuenga (also known as “The Capitulation of Cahuenga”) was signed between Lieutenant Colonel John C. Fremont and General Andrés Pico on January 13, 1847, ending the fighting in the Mexican American War.

END_OF_DOCUMENT_TOKEN_TO_BE_REPLACED

If you are a basketball fan, you might recognize The Forum in Inglewood, California.  It opened on December 30, 1967 and was an unusual and groundbreaking structure in that it had no major support pillars.  It was created by Architect Charles Luckman and engineers Carl Johnson and Svend Nielsen and was famous for being the home of The Los Angeles Lakers before moving to the Staples Center in downtown Los Angeles.  Now the venue is rented out for special events and concerts.

Across the street from The Forum is the Inglewood Park Cemetery.  The cemetery was built in 1905 and has a number of notable entertainment and sports figures such as Ray Charles, Betty Grable, Ella Fitzgerald, Gypsy Rose Lee, and Ray Corrigan (the actor who owned Corriganville where we had previously visited the remains of his western amusement park).

Lex,Sar and I have visited here many times to pay our respects to a relative of mine who is interred here.  The grounds are beautiful with rolling hills and memorials to those who have passed on. A Canadian goose was having a great time on the warm sunny day. 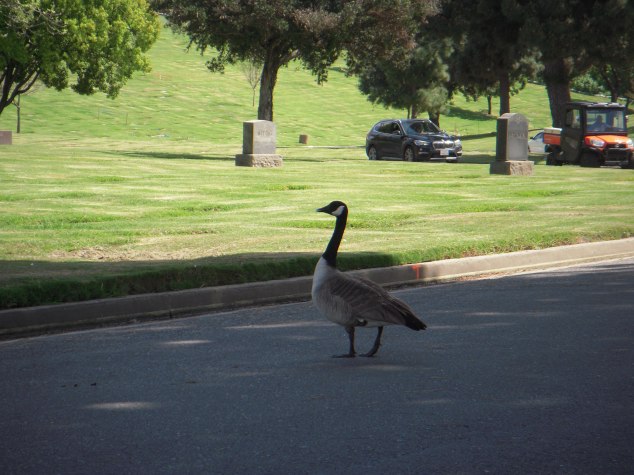 One memorial has always caught our attention while on our visits and it is a sculpture of an angel lifting a woman to heaven.  The faces are quite detailed and the base is carved with two rings in which one is broken.  We did some research and found who they were. 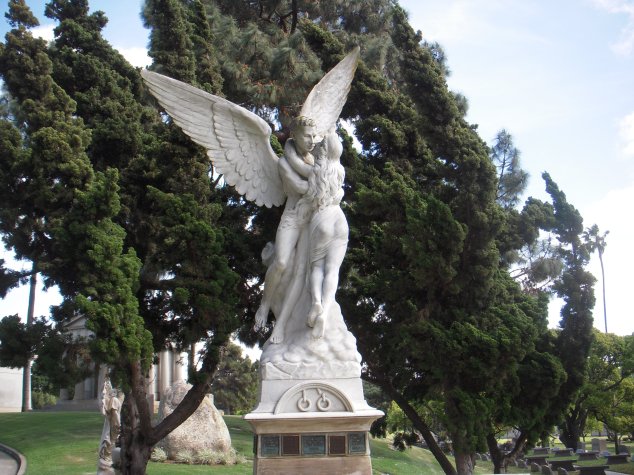 The models are of Alfredo Codona as the angel carrying his wife, Lillian Leitzel in an embrace.  They were circus performers.  Lillian Leitzel was only 4 ft 9 in (144.78 cm) but  incredibly strong and could do one armed flips over her shoulder repeatedly while the audience counted and cheered.  She performed for the Ringling Bros. Barnum and Bailey Circus and was posthumously inducted into the International Circus Hall of Fame.

Lillian Leitzel had quite a temper and was famous for throwing things and slapping people who didn’t work to her expectations.  In contrast, she was also known for her kindness toward the circus performer’s children who called her “Aunt Lillian”.  A little mental maybe?

In 1928, Lillian married Alfredo Codona who was a trapeze artist, famous for doing the often dangerous triple somersaults.  Their relationship was quite tempestuous and their diva-like personalities were well-matched.

While performing in Copenhagen in 1931, one of the hand rings broke and Lillian fell to the hard floor.  She died a few days later at 39 years old.  Even though they had such a troubled marriage, Alfredo Codona’s love for Lillian Leitzel was quite evident by creating this beautiful memorial to his wife.

One of the last surviving Southern California mimic architecture is Randy’s Big Donut.  Mimic architecture started in the 1920’s creating a trend in designing structures in the shape of the product that was sold there.  By the 1950’s building such structures were out of style and too costly.  Randy’s Donut was built in 1953 and was the second location of a number of donut shops owned by Russell C. Wendell, a donut machine salesman.  The giant donuts are constructed of steel bars and a dry type of concrete called gunite usually used in swimming pools.

Originally, there were 10 Big Donut Drive-Ins but only 4 have survived.  In the 1970’s Wendell sold off the donut shops to concentrate on his “Pup in Taco” chain (Lex is wearing one of the old shirts) which was then sold to Taco Bell in 1984. 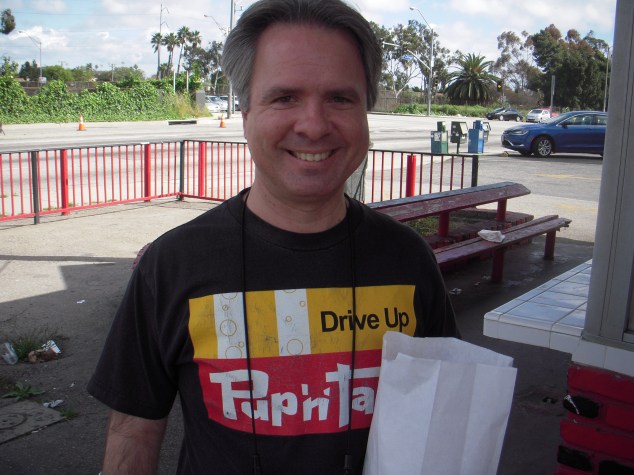 If the Randy’s Donuts looks familiar, it’s probably because you’ve seen it in various TV, movies, talk shows and music videos.    My favorite is the big donut in Randy Newman’s 80’s hit “I Love LA”.

Lex, Sar and I stood in a line to get a bag of apple fritters and a buttermilk donut.  I almost dropped a dollar bill and lost it to the wind but a kind man in a beige hat fetched it for me.  The donuts tasted great but when I was a kid, I really wanted to take a bite out of the big one.  Good thing I never did because it’s got bird poo all over the top of it!

When Neek and I first walked into the William S. Hart Museum foyer, two immediate impressions of the man formed for me: his love of art and his love of the Old West.  This 10,000 square foot Spanish Colonial Revival style mansion completed in 1927 was designed by Arthur Roland Kelly, who was also responsible for designing the Arthur Letts, Jr. estate in Holmby Hills, more popularly known as The Playboy Mansion where Hugh Hefner lives.  I noticed that along the spiral staircase leading up to the second story, there were beautiful paintings of Western motifs.  It seemed very inviting, but Neek and I decided to explore downstairs first.

Usually they have guided tours, but Neek and I happened to arrive on a day where they were presenting the place “open house style.”

END_OF_DOCUMENT_TOKEN_TO_BE_REPLACED

Walking into the unassuming building across from the Grand Central Market in downtown Los Angeles, you would never guess what visual spectacle was waiting inside.

It was mind blowing!  What magnificent looking futuristic architecture! END_OF_DOCUMENT_TOKEN_TO_BE_REPLACED